Today this very puffy and Tober-like (although larger and brutish compared to my slender self) critter was discovered standing way too close to Assistant Assistant Boss Christine's chair! (AAB Christine's chair is very comfortable and cat-hair filled, and it's where I hang out when AB Karen won't stay put.)

We are engaged in a staring contest, a battle of wills:

If you can't tell, I am a bit perturbed by the presence of this Imposter. Assistant Boss Karen has decided to place him by the Adult Circulation Desk, where I can dart past him if I so choose.

I'm not sure how I feel about this guy.

I'm thinking about attacking him during the night. Unfortunately, I think the security camera points that direction.

Contemplating the future of rogue Stuffies in my Library,

The Stuffie has been removed from my view. I was so disturbed that I tried to move in with Assistant Assistant Boss Chris (who lives downstairs and very near a door to the Outside).
Posted by Tober the Cat at 7:50 PM 11 comments:

An Intruder! and Inventory. . .

On Wednesday we found an Intruder in the library! Unfortunately, it wasn't a very exciting Intruder. (Exciting Intruders are houselibraryflies and Wasps.) So I stared at it for a while and decided it wasn' worth my time. 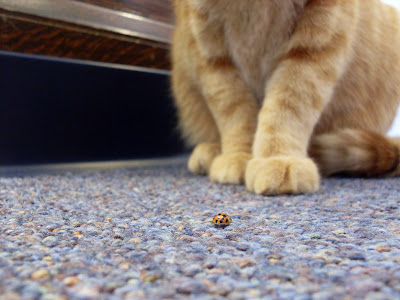 These last two weeks my library bosses have been very very busy doing something called Inventory. Inventory means that they are taking all of the books and dvds and things off of the shelves, loading them onto carts, rolling them over to computers, beeping the things with a scanner, and then putting most of them back. (Some of the books and dvds don't get put back because they are broken or need new covers or have the wrong Dewey number on them.)

Why do Inventory? I don't know. I think they're all trying to look busy and Important when the customers come in. It also seems to be an excuse for treats like breakfast casserole and Dairy Queen treats and bean dip and fruit and chocolate.

During this time I have been seriously Unhappy. I have expressed myself by tearing up the Inventory Assignments: 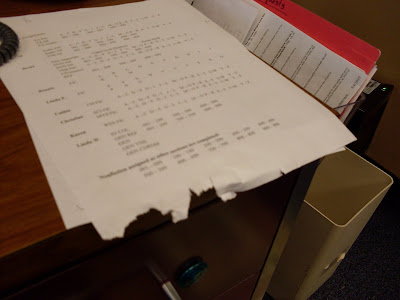 I have also decided that I need a good place from which to Snoopervise everyone: 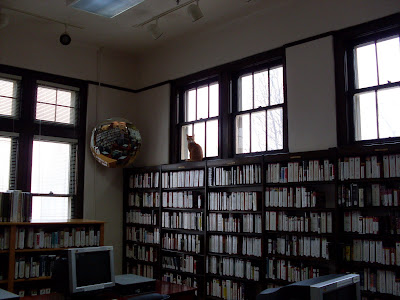 . . . but then I decided that this spot was much better: 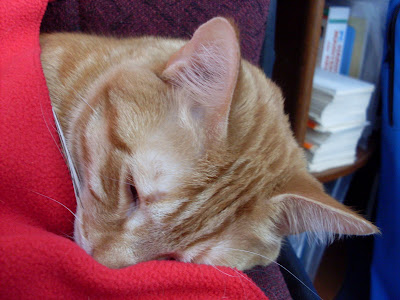 I hope that they get this Inventory thing done sometime during one of my nine lives, because the beeping gets a bit obnoxious when I'm trying to Nap.

The Thorntown Division of the American Army of Hoodie Hooers is pleased to report that Winter has been chased away for 2010. Any recurrence of Snow or Cold will be ignored by the residents of Thorntown, Indiana.

My Photographer discovered a new button on her camera that makes movies. (I tried to tell her the button isn't new--it was there all along--but she still calls it "new" like it just grew onto the camera or something.)

This is My Very First/Happy St. Patrick's Day/Happy 100 Blog Posts (to ME!) Movie:

My other Assistant Assistant Bosses tried telling her to cut the stupid string off but she's stubborn.

This is My Very Second/Photographer Has Issues Uploading to Blogger/Trying the Hat without the String Movie: