I'm having trouble with one of my employees.  Maybe you can offer some advice as to how I should discipline him.

AAB Ritchie, who is the Library Custodian, seems to be under the (false) impression that cats shouldn't sit in chairs.  Apparently he thinks that if the cat (that's me) never sits in chairs, he will never have to clean cat furs off of them.  So when he sees me in a chair, he shakes the chair until I leave it.

Kitties, I know!  I know this is horrifying.  Hopefully your people have smelling salts (or at least canned tuna) nearby.  I held a staff meeting to determine how best to deal with this insubordination.

AB Karen suggested we discipline him by withholding cake.  In case you've never read my blog before, cake is a big deal around here.  We like to have cake of some sort to celebrate days ending in Y.  Ritchie *loves* cake.

First AAB Becki hid the cake.  This caused some distress when other staff ladies couldn't find the cake for a 4pm snack, but riots were avoided when the cake was discovered after a tortuous 90-second search.

After the cake was hidden, AAB Britta made Ritchie a special computer screen:


Ritchie thought it was funny.
So I arranged for a special "treat" for him.
Do any of you have ideas on how to properly train a human?  He's a guy-human, which makes him a little harder to train, but still. . . You have no idea how awful it is to be awoken from a great nap by the whole world shaking.  This has to stop!
Thank goodness we have a three-day weekend coming. I will have an extra day (without AAB Rotten Ritchie) to nap uninterrupted, and maybe I'll think of a good way to discipline him.
Until then, I remain ready for battle.
Wishing everyone lots of naps in chairs,
Tober
﻿
Posted by Tober the Cat at 3:11 PM 10 comments:

In case you didn't know why they are called Library Bored Meetings:

AAB Kathy looks super-happy in the top picture because (a) she only had to spend 10 minutes at the meeting and (b) she was sharing the news that the Thorntown Kiwanis Club decided to donate moneys to help the youth department start a new once-a-month Lego Club!

AAB Britta ate some Starburst candies today and left the wrappers in her trashcan.

To get to the tasty wrappers, I had to be sneaky.  First I knocked over the trashcan.  Then I took a surreptitious (that's Fancy-Pants for "stealthy") glance around the office to be sure I couldn't be spotted. 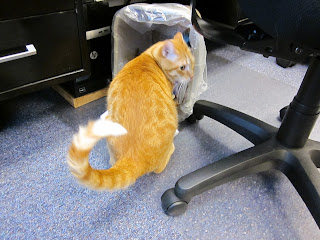 Then I did some investigating to see what treasures the trashcan might hold. 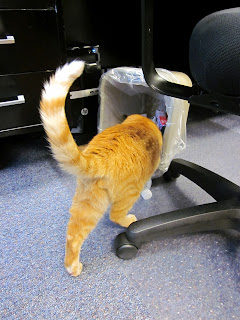 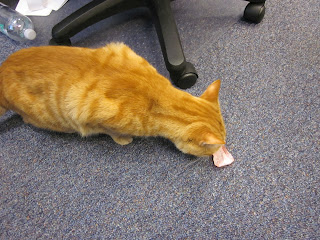 Then I paused to let that one digest a little.﻿ 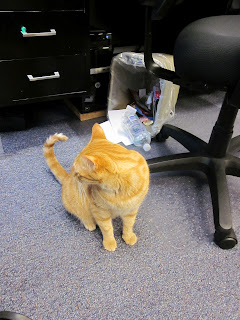 Then I fished out another wrapper!  I'm so happy AAB Britta likes Starbursts!﻿ 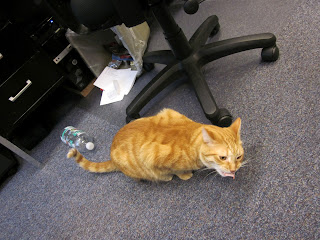 That one would have been tasty, too, but AAB Party Pooper took it away from me.  She said ONE candy wrapper paper is enough for one day, and that my love of candy wrappers (and other papers) will make me urp.  But I still managed to make a mess. 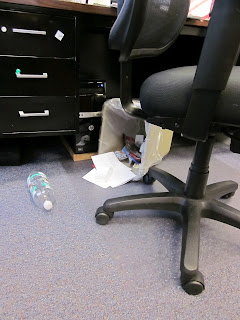 Do you want to know a secret?  AAB Party Pooper might think she's all strict and stuff, but guess what she did with the other tasty Starburst wrapper. . . Guess!

She threw it in her little trashcan.  Hee hee!