I met a Tomato this week. I am told that this is a Fruit. It is Produce, so I made AAB Christine take it away from here. 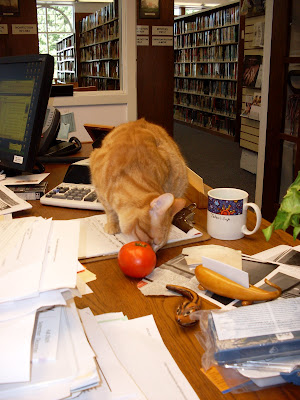 I also assassinated a roll of papers, and I did this without getting any labels stuck in my whiskers! 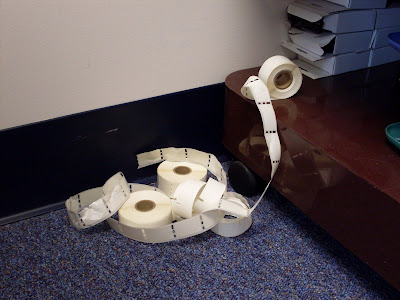 Even though I am locked out of the processing office at night, I have learned that I can sneak in during the day sometimes and have fun with the paper products while my employees are busy answering the phone and waiting on customers.

I also think that my Staff people are trying to distract me from my love of chewing on Cords. They have brought some strange rubbery offerings that they seem to want me to chew on: 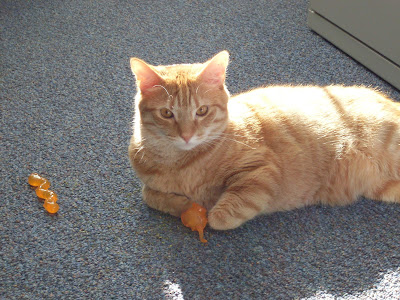 They keep telling me that the skinny one is a Cord, but it's not. It's a rubbery worm, and it doesn't have all the interesting wires in it that a Cord has. They all stood around me on the morning they gave it to me and said "Chew it, Tober, it's a Cord. It's a Cord!" I'm not stupid.

Occasionally, when they're not looking, I sniff it and bat it around a bit. (The mousie has 'nip, so I don't mind it so much.)

My Library is being invaded by things called Produce (or, more commonly, Vegetables).

In case you haven't noticed, I have a kind of food-y Library. My staff likes snacks, especially when they involve chocolate, but they also like anything that can be baked, iced, or spread on a cracker. I am fine with all of these foods being here (and I love love love that Whipped Cream stuff), but I have a problem with Produce.

As you probably know, I assault Apples frequently, even if they travel in small groups. Assistant Boss Karen hides them in drawers, but when she opens the drawer, I pick them up and throw them in a wastebasket. I also slap dried gourds around. They look like they used to be Produce before they died.

I thought I had Karen's Produce problem under control until I went into the office one day and found a small green object. 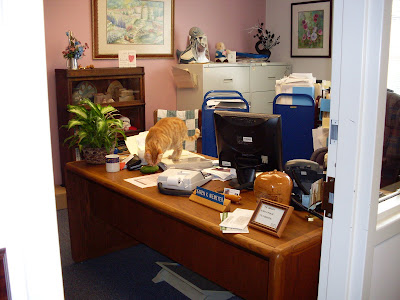 I have learned that this is a Cucumber. 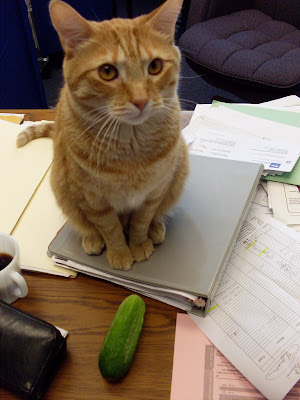 I bit at it with my sharp teeths and licked it and pushed it a little bit, but it was blocked in by piles of Very Important Library Papers. Assistant Assistant Boss Christine reported to Karen that I was displeased with the Cucumber, and that she should take it away (and also wash it before eating). It was removed immediately--hopefully away from Library property.

AAB taunted me with a Cherry shortly thereafter. I was not impressed with the Cherry, so Christine ate it before I could throw it into the wastebasket.

My AB Karen has been at the Indiana State Fair surrounded by Produce and Gourds for the past several days, so I imagine that her fascination with Produce would end--or at least be satisfied for a few months. I was happily enjoying a Produce-free workplace when, earlier this week, I hopped onto Bonnie's desk to find. . . 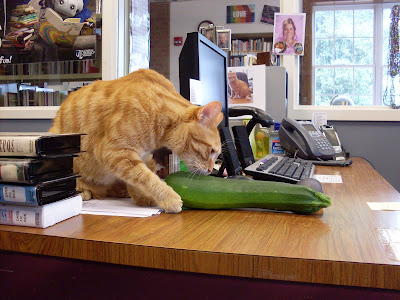 This is the Biggest Produce that has invaded my Library yet! I would never have expected this of Assistant Assistant Boss Bonnie, who indulges my love of Catnip and keeps a special slidey-drawer for my sitting pleasure. Treachery!

I can't explain my dislike for Produce. I think it's weird-looking. It doesn't look like there's any proper way to eat it, especially if you're a Cat. It's hard to get my teeths into, and it rolls when I try to get my paws around it. I am really glad I'm an Indoor cat, because I hear that there is a lot of Produce running wild out there. Armies and armies of things called Corn and Beans.

Whew, am I one lucky Cat.

Believe it or not, it is very difficult to get peace and quiet in this particular Library. I finally found a nice place to hide and have a Nap. 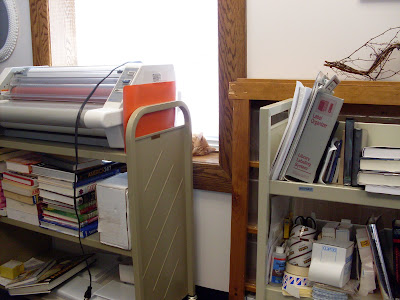 Unfortunately, the existence of these photos means that my nice place is no longer a Secret. 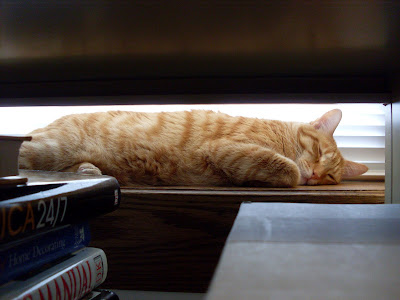 I have a few places they have not discovered yet. I would tell you about them, but my Staff sneaks around and reads my blog sometimes.

You can keep a dog; but it is the cat who keeps people, because cats find humans useful domestic animals.- George Mikes

Mr. Mikes must have been a very smart and perceptive person; well-trained humans help make World Cat Day worth celebrating!

I will celebrate my Cattitude by posting some of my favorite pictures below. Enjoy!

This is a very favorite because I look so Bossly: 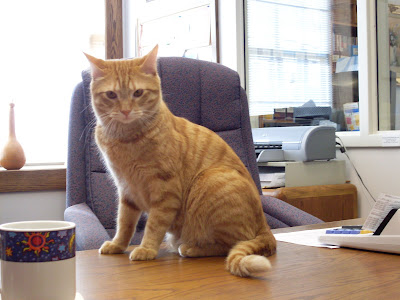 In this one, I am resting after helping Assistant Boss Karen do the state report: 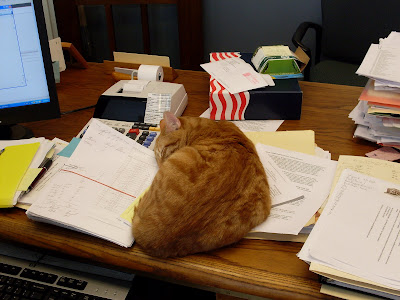 I greet my staff when they come to work with the morning flop--this is code for rub the tummy! 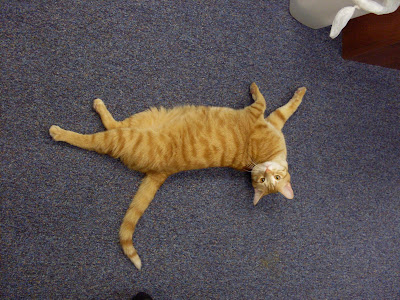 This is a good picture because my eyes look very bright: 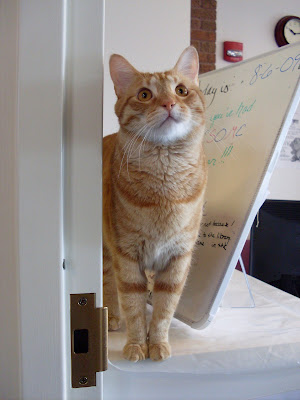 I hope all of the Cats in the world have a fabulous World Cat Day, and that their humans administer many, many treats, tummy rubs, and pettings!

Basking the glow of Cathood,

Let me tell you, I am one hard-working Library Boss.

In the picture below I am Multi-tasking. This is when you do several things at one time. 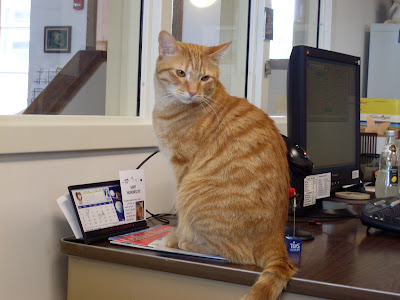 Task 1: I am appearing to be disinterested in having my photo taken because photos are more fun that way.

Task 2: I am looking at Linda and Bonnie to see if they are admiring me.

Task 3: I am listening intently to Cathie as she exclaims how sweet and handsome I am.

Task 4: I am standing near the Valentine I made, so people will be reminded that I am a very thoughtful cat (who likes treats).

Task 5: I am holding down the magazines that Cathie would like to catalog, because when she is cataloging magazines she is not petting me.

Task 6: I am, as always, listening for any of the smallish, noisy humans that invade the library on especially hot days.

That is 6 tasks at one time! I think my Multi-tasking ability is why I am the Boss here; I have seen my staff trying to Multi-task and they just seem to get all confused and run around in circles. I have Multi-tasked 6 things, and only slightly turned my head and swished my tail the whole time.

I think I will train my Staff about Multi-tasking later this week. They could learn many things from Us Cats.

I can even Blog and Nap at the same time!