In my latest browsings, I stumbled upon a book titled Mouse Soup.  Naturally, this was an intriguing title for me.  As I've mentioned previously, judging a book by its cover is something I generally frown upon (although if you ask people around here, they'll probably tell you I always have a frown on my face, which isn't true.  I smile.  Sometimes.).  However, if a book has an M-O-U-S-E on the cover, I'll probably read it. 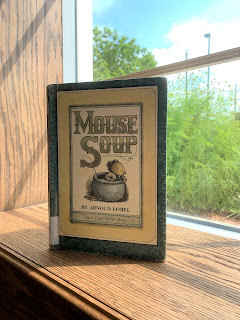 Well, not only did this book have an M-O-U-S-E on the front cover, but it also had an exciting title.  "Mouse Soup".  Which, if you ask me, sounds like it should be a snack recipe book.   So I decided to give this book a read. 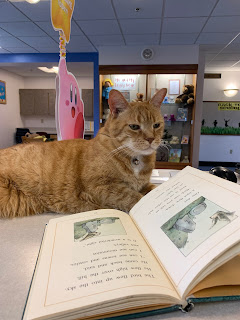 Being the critic that I am, I wrote a review.  I posted my review on my *brand new* Goodreads account, but I'll also put it here:

I’ve never tried eating mouse soup.  In fact, as a cat I certainly would never even consider eating an M-O-U-S-E, unlike the weasel in this book.  But the story sounded interesting.  In the beginning, I thought this was a recipe book for snacks for cats.  I was mistaken.  However, despite this book being a story about a heroic mouse, and not snacks for cats, it was still interesting to read.  I particularly appreciated how the book gave insight into how an M-O-U-S-E may try to trick a predator friend.  This may be helpful for me in the future if I ever meet an M-O-U-S-E.

The M-O-U-S-E tells the weasel several stories that really didn’t make sense to me.  For example, in one story a bush grows out of a chair.  That has never happened to me and I sleep in a lot of chairs.  And all the bushes I can see grow outside.

So, overall, Mouse Soup is probably a good read for the young humans.  But maybe not for cats.

I still am slightly disappointed that this book didn't contain more snack recipes, but I suppose since I'm not allowed in the kitchen anyways it wouldn't do me much good. I'll just have to find someone to open the treat drawer for me again. 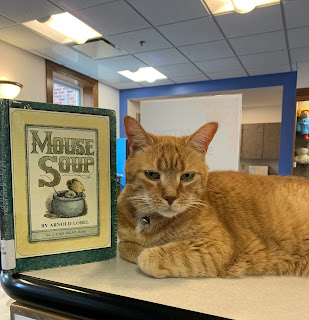 I'm off to find my next read,