I've always been told that mice like mazes and are even experts on running through them.  So a cat has to wonder; Could a cat beat a mouse at running through a maze?  Entirely for competition, of course, not because I want a snack.

The other day I decided to test this.  Or rather, Barb L.  had a cardboard maze set up for a summer program, and she thought I'd like it. 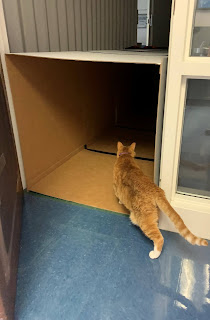 The maze was entirely pitch black inside, which I guess was a problem for the humans who went through.  A bunch of them took flashlights so they could make it out.  The ones who braved the pitch dark without a light kept running into the walls, which was hilarious.     I, on the other hand, am a cat.  And cats don't need flashlights to walk through a dark maze without running into the wall.  It's one of our many talents. 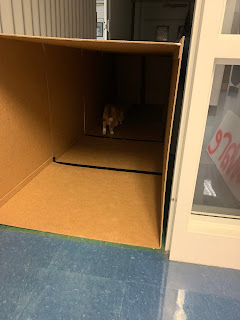 I heard that some kids found the dark and twisty carboard tunnel to be a little scary, but I thought it was quite exhilarating.   In fact, my third time through I was having so much fun I didn't want to leave.  One certain staff member was beginning to be concerned I might be lost and stuck her head in the maze to try and find me, which I thought was silly.  If I wanted to be found I would have been found.
Eventually I came back out into the real world. 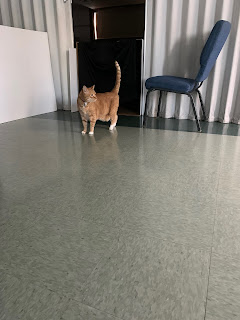 Which perhaps was a mistake, because I'd really like to leave the "real world" for a bit longer and go back into that box maze.
Training for a mouse maze,
Chance
Posted by Chance Cat at 4:21 PM 4 comments: