We all have a lot to be thankful for, don't we?  Lots of food, love, warm blankies, awesome toys, catnip, sunbeams, comfy chairs, and, most of all, Forever Homes.

Okay, I got all of that sappy stuff out of the way.

Mr. Turkey will be thankful on Friday when he can go back into a storage room:

And I am thankful that I was only harassed for 3-4 minutes while Christine worked at this lame attempt of a Thanksgiving photo: 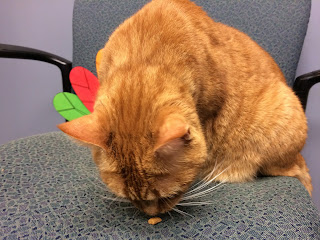 At least there were treats involved.  You know she's desperate when she uses treat for bribes!

My library is closed today, but I will have visits from my best friend Karen.  I am thankful that she doesn't count treats but instead dumps them from the bag into a little (or big) pile.

There seems to be some concern among *certain* people that I have gotten a bit too stout.

There, I said it.  I know they say things like "husky" and "beefy" and "filled-out" but I know what they really mean.  Dr. Jon (my V-E-T) was sighted in the library a few weeks ago and whew I'm glad he didn't come to see me!  A little visitor said I looked like Garfield!

Now I have a new exercise regimen, and a new toy (what Tober referred to as a Feline Training Device).  I LOVE IT, except for that it's PINK.


It's a Pink Flamingo, which is Barb L's most favorite bird ever.  Once a day (unless somebody forgets), we take out my Pink Flamingo so I can hunt, chase, and murder it to death.  It has feathers, and catnip inside, and makes crinkle sounds when I smoosh and bite it.

Do any of you have very favorite special toys?  I also have some mousies, a nip 'nanner, and another wand toy!

Chance
Posted by Chance Cat at 9:00 AM 5 comments:

Today it has been one whole year since my esteemed predecessor Tober the World and Internet-Famous Library Cat crossed over the Bridge.

But he's still around. 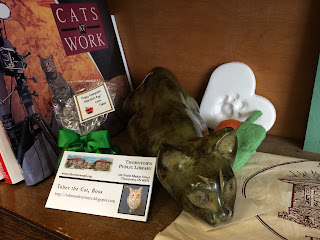 My coworkers have files full of mementos from his years of Librarycatdomhood.  Christmas cards, signs, old collars (that he absolutely refused to wear, even if they were hand-made or special-ordered and had the Dewey number for "cat" on them), letters and artwork from fans and friends.  One of the mementos you see in the photo above is the orange-and-green Forever Pepper that was crafted for Tober to help him with the loss of his real Pepper that he loved so much.  You can read about his Pepper here and here.

Well, the real Pepper's story didn't actually end in OcTOBER 2010.  See, then-AAB Christine did (reluctantly) throw it away after she decided it was too yucky to be used as a Feline Training Device.  So she tossed it in the wastebasket under her desk.

As you know, in addition to being handsome, intelligent, and mancatly, Tober was a World-Class Wastebasket Tipper.

Seriously.  Picking up wastebaskets each morning should have been added to the custodian's job description.  AAB Photographer was all the time getting shots of Tober's 'tocks sticking out of a wastebasket!

In March 2011, Christine moved a file cabinet away from the wall and found, you guessed it:

And she did with it what any rational (cat) person would do.  She stuck it in her desk drawer.

I'll spare you the details of how it moved from drawer to drawer, and eventually into another office, where it found its way to the bookcase where Tober's Forever Pepper now resides.  Real Pepper has been there for a year, tucked away behind Forever Pepper, an homage to Tober's War on Produce and love of wastebasket-tipping.  Sometime last month it would have celebrated its 6th birthday, if Peppers were celebrated like that.

So, today, in memory and celebration of Tober, Library Cat Extraordinaire, I spent a few minutes admiring his Pepper.

It smelled kind of weird.  I tried to bite it, but it has been returned to its (hidden) place of honor.

Remember Tober today by following the linkies in this post.  He had lots of fun being Library Cat, and lots of love, and he made lots of memories with his friends.  Wherever the Bridge is, I hope it has a good supply of wastebaskets, Post-It notes, and Temptations cat treats.

Chance
Posted by Chance Cat at 9:00 AM 6 comments:

Up All Night, Sleep All Day

My coworkers have wondered what in the world I do all night while they are home asleep in their beds.  I was perfectly cool with letting them think that I sleep for 23 hours each day, but I got busted:

Apparently Christine drove past while I was window-patrolling Market Street.  So she pulled into a nearby business to turn around (she did NOT do a "U-turn" oh no she didn't Thorntown PD) and came back to take a few pictures of me.  She could use some work on her night-time photography skills.

Now everybody knows that while they are home doing Not Much, I am busy making sure North Market Street is A-OK!

Then, after a long night of watching, it's time for a long day of intermittent snoozes.  I like it when the sun hits the wood floors in the Guinn Room.