It's no secret that fish tanks are a source of relaxation and peace (or snacks).  Or at least that's what they're supposed to be.  There's even a fish tank in the Library.  It's in the Youth Department, and I suspect it's because the Youth Staff are trying to bring a little more peace into their lives by relaxing the kids with calming fish.  I'm pretty sure it does the exact opposite because I hear a child shriek "NEMO!!!" at least once a day.
That would be part of the reason I keep to the second floor.
But when I do venture down to the first floor, I like to take time to watch my friendly fishy friends swim around in their tank, doing whatever it is you do when you're a fish.
Except, sometimes they're not so friendly.
They've never been rude to me.  (although sometimes they hide, and I have no clue what that's about because I think I have a very friendly cat face, despite what some people say)
But for some reason, they like to pick on each other.  Maybe it's the whole roommate thing.  I might be grouchy too if I had to share a space with six other fish, a bunch of snails, and a spikey thing.
But regardless, I think they need to calm down.
I came downstairs one day to visit with my fishy friends, only to find there were two fewer than there was the day before.
Either there has been a tragic fish crime committed in the tank, or two of the fish decided to move out.
I prefer to think it was the latter.
And don't look at me, because fish are friends, not snacks.
Whatever happened, I'm sad that there are now two less fish to watch.  But I've heard we might be getting a new fish friend soon-- a long nosed something or other.  Someone should warn the new guy that it's a jungle in the tank, so he better keep his guard up.  Nemo and Other Nemo might not take kindly to a new fish with a nose as long as Pinocchio's. 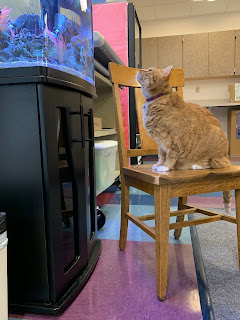