We *almost* had an unauthorized visitor yesterday at my library.

As you may know, we have a no-animals-except-Tober policy here at the library.  Now, there have been exceptions to this policy. . . Like when Silly Safaris brings a pooping reindeer.  Or when Animalia brings a skunk and some ferrets.  Or when Not-Tober was here for a day.  Or when the stupid smelly kitten spent an afternoon here.

Or when baby goats visited.  Or when the helper-dog-in-training stops by.  Or the guinea-pigs.  Or the bunnies.

Or the mini-horse and the alpacas.

Whatever.  We really DO have a no-animals-except-Tober policy, I promise!

Anyhow, yesterday we had a library invasion attempt perpetrated by a rogue squirrel (pronounced SKWURL).  He was pretty shifty looking: 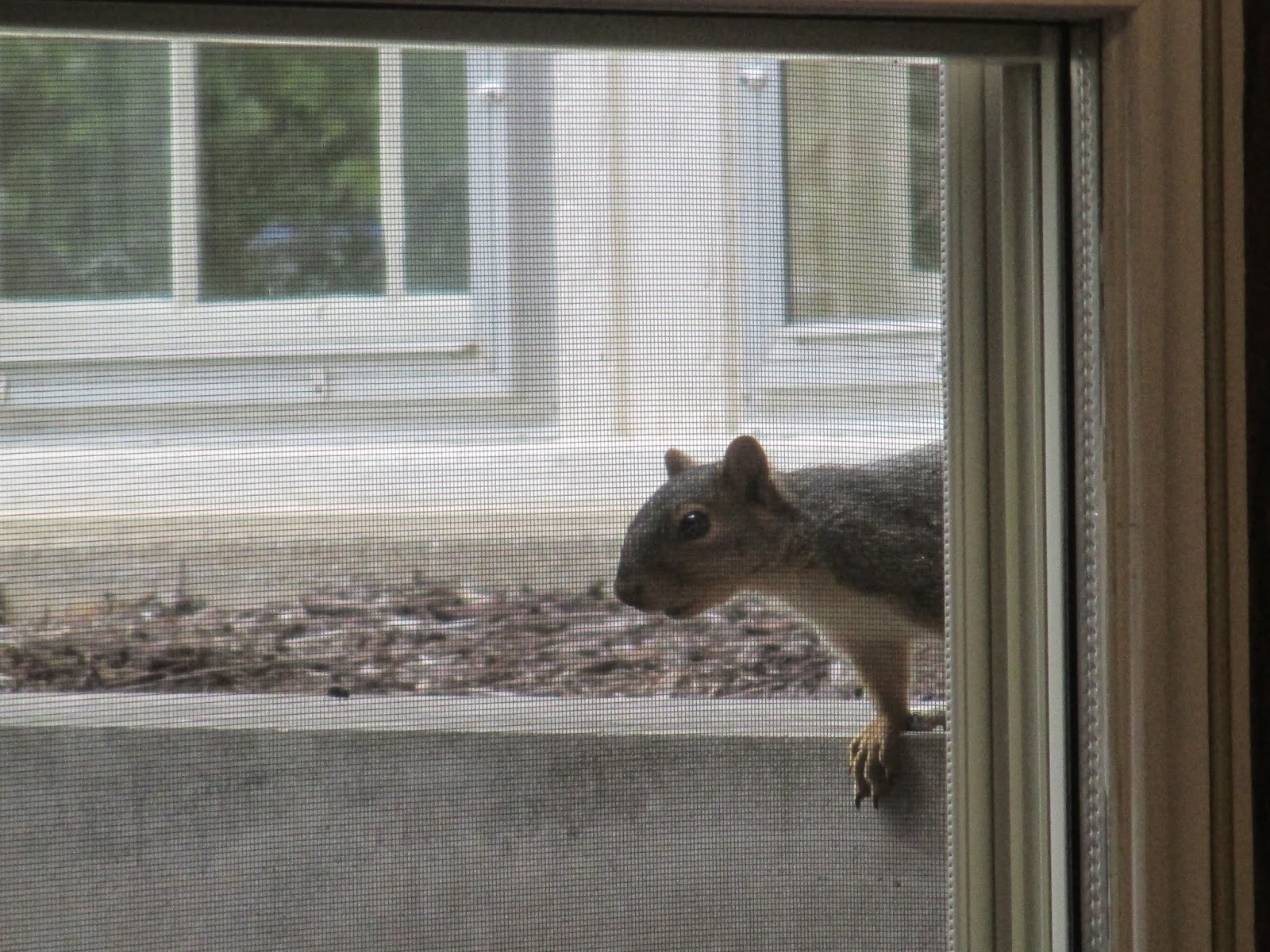 He looks nice and polite in this picture, right?  Like maybe he's just checking the place out, looking to see if this might be a fun hangout for squirrels.  Maybe a can of peanuts.

Then he gets a little more animated, looking for spots where he might gain entry, I think: 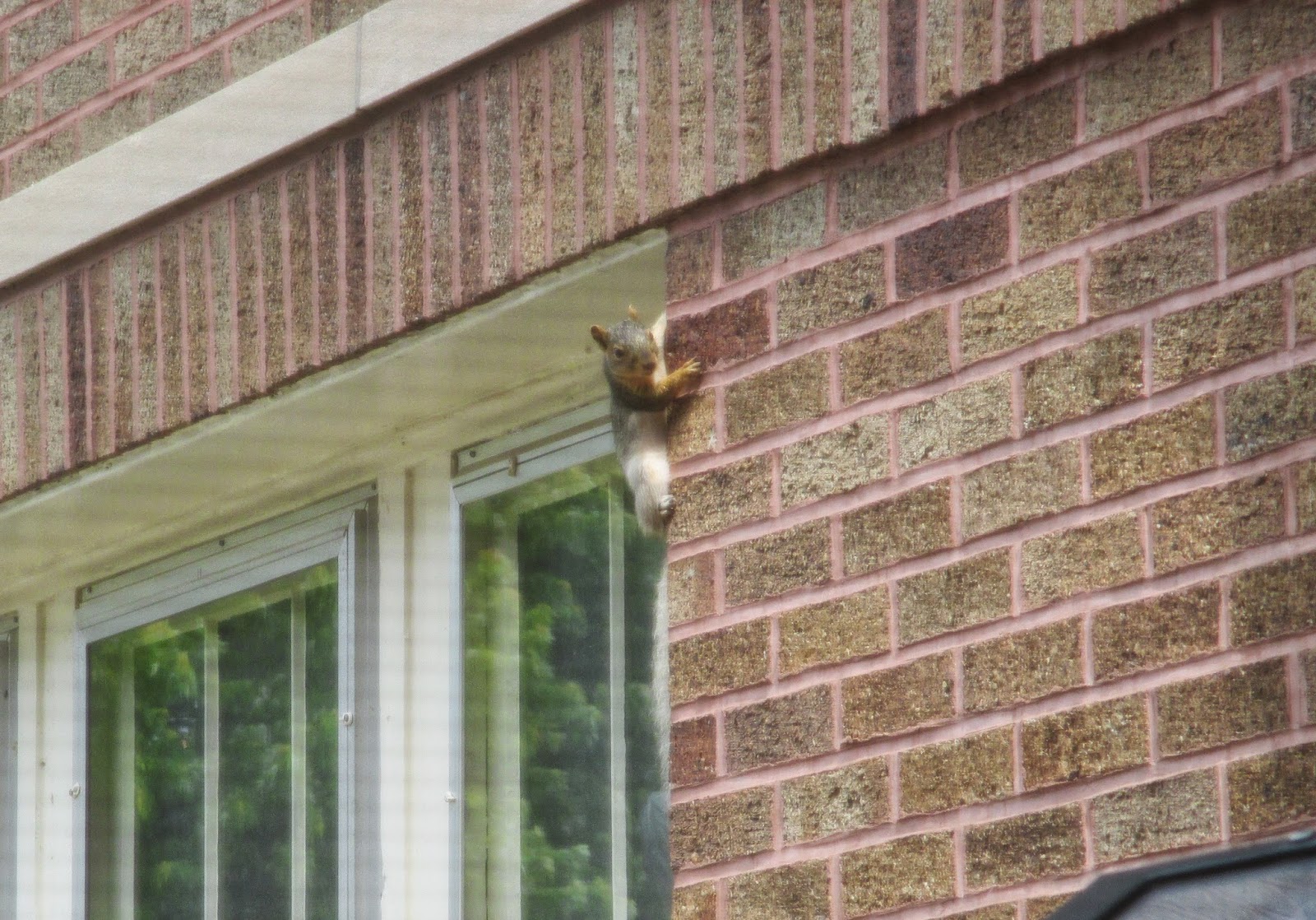 Or maybe he's just practicing his climbing skills.  He was a medium-sized squirrel, so maybe he needs climbing time.

After he looked in one window and climbed around another, we thought maybe he was done with our library.

Then Mr. Skwurl came back and got serious about trying to get in: 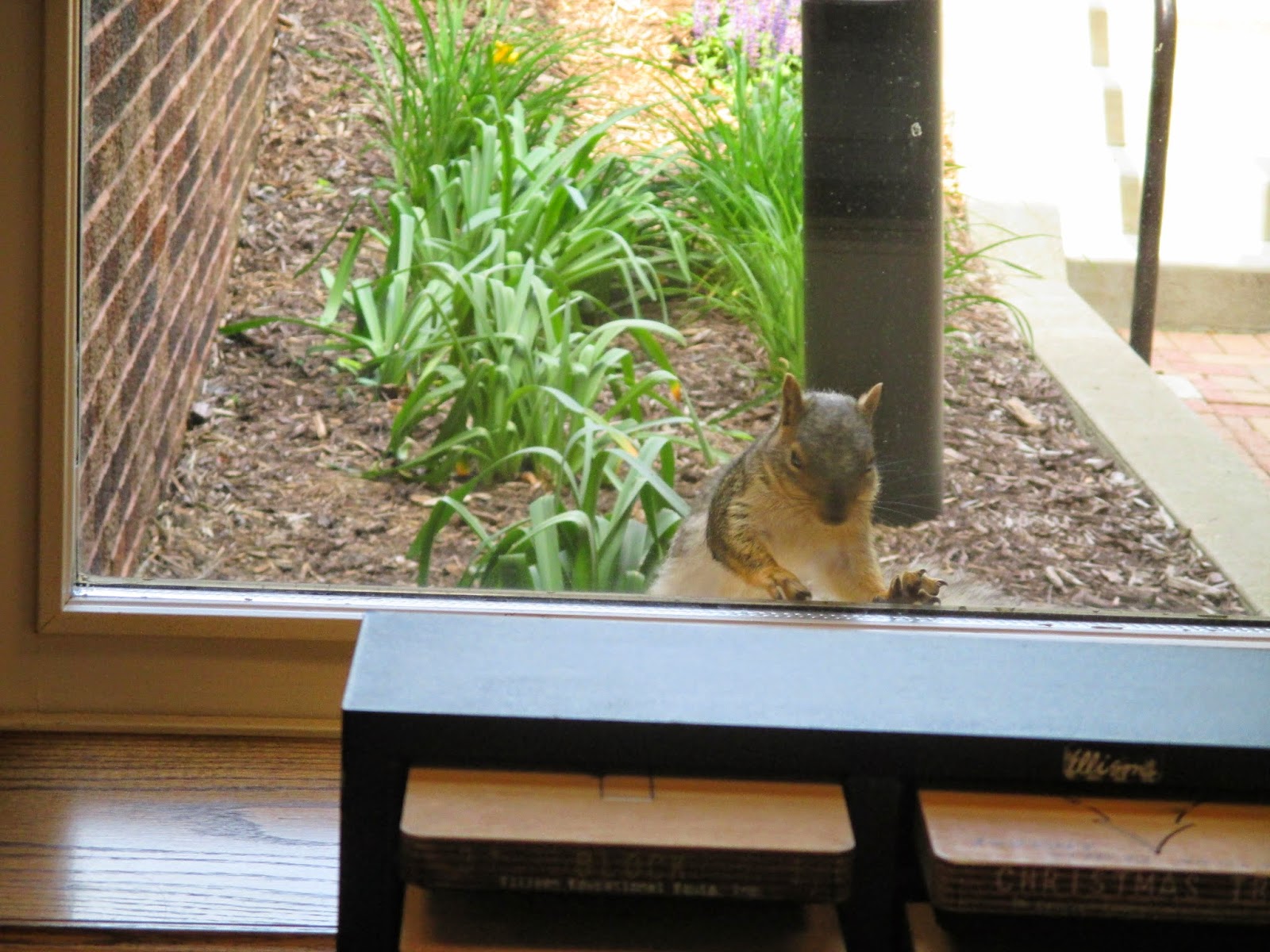 Luckily I was there to intimidate him into going away, because I am very Bossly and Imposing to a small-to-medium sized squirrel.

It's a good thing I was here to save the day!

Protecting my library against invasions by wily teenaged Squirrels,

You're gonna love it in an instant!

You probably think I'm going to write about the powdered drink mix. 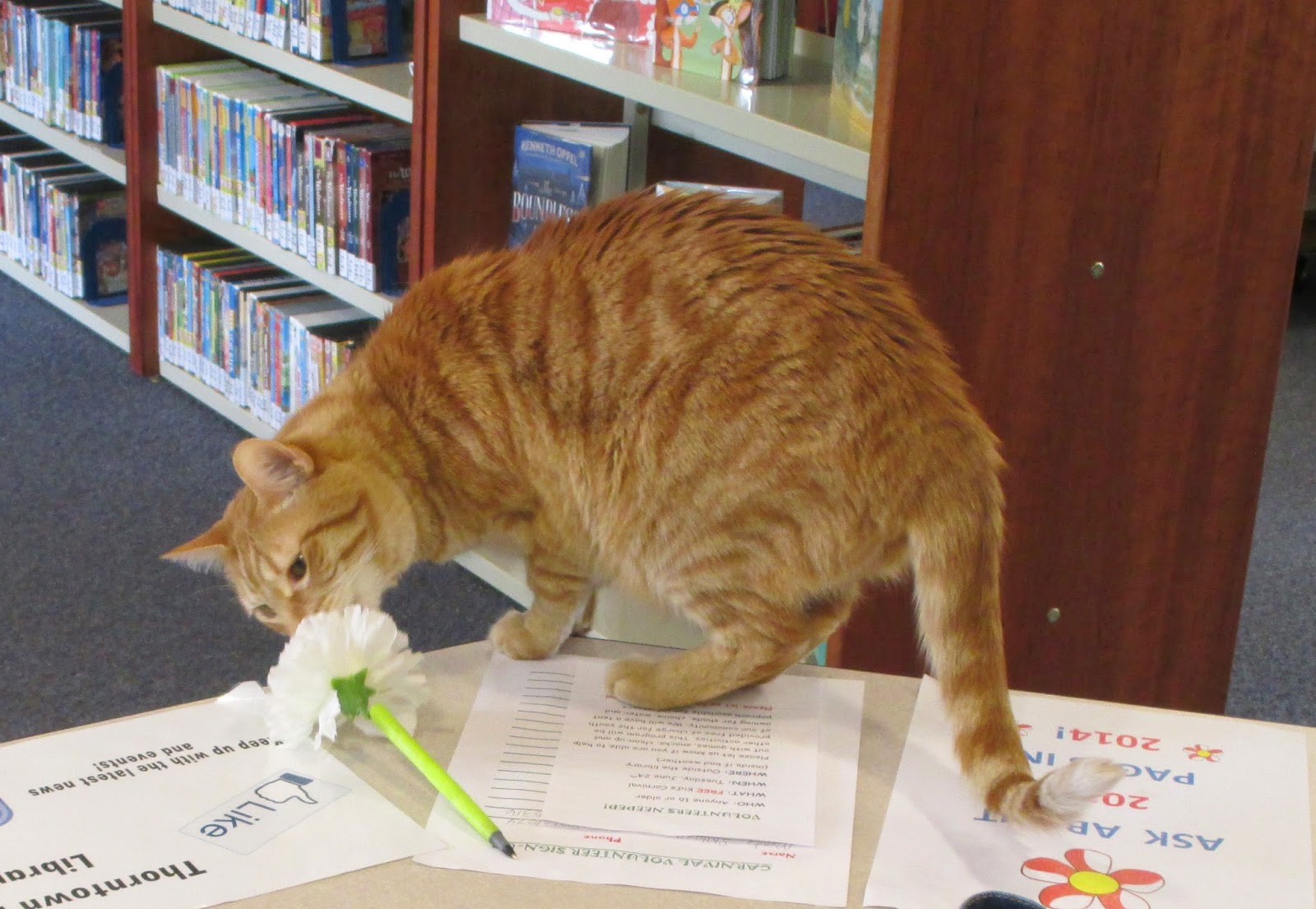 Wow, I love love love biting on silk flowers!  The library staff leave them all over the place for my enjoyment in the springtime.  This year they've started complaining about how ratty all of the flowers are looking.

AAB Kathy may have to add "Photographer" to her job description.  Yesterday she took an awesome photo of me: 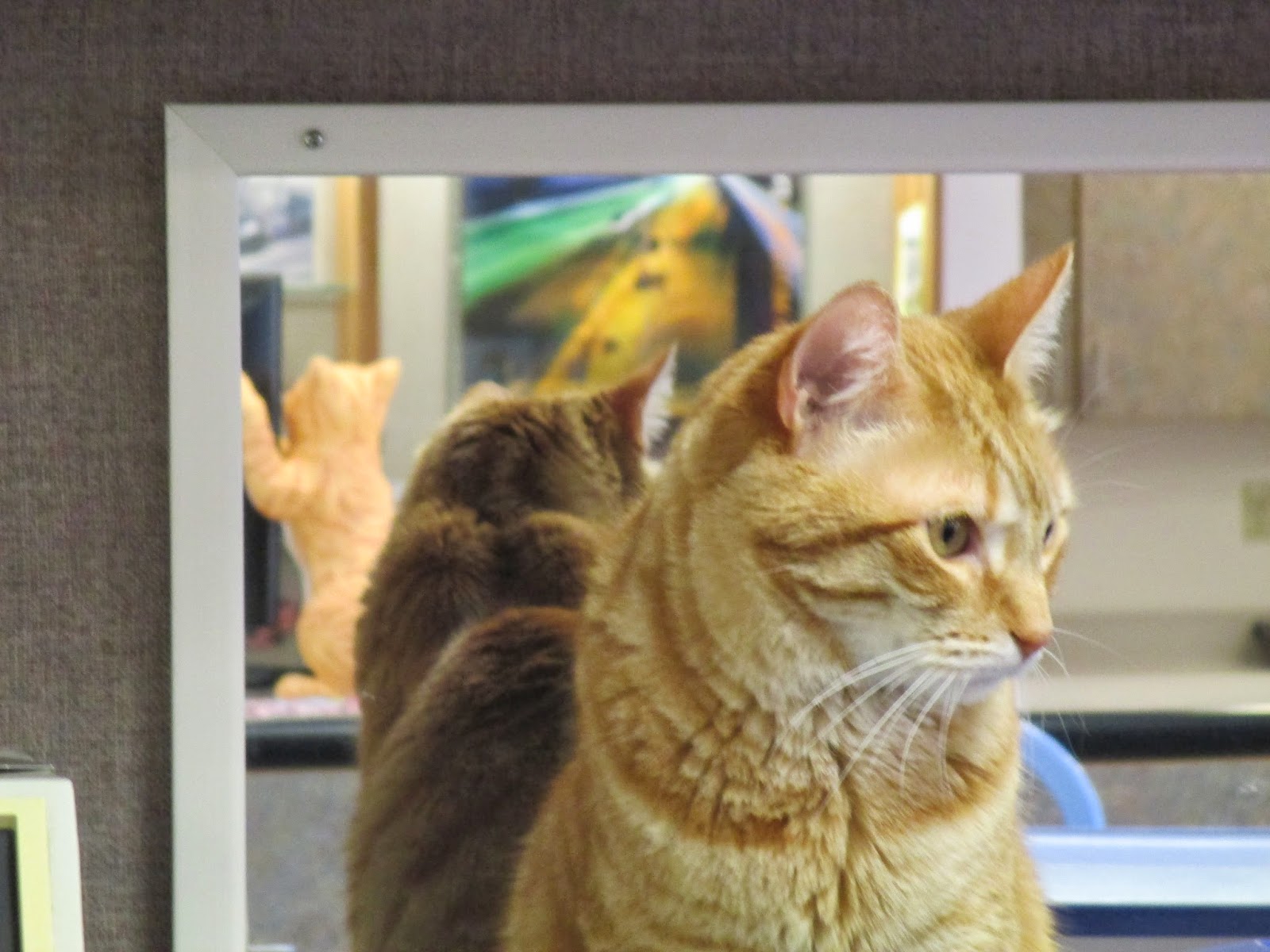 Look at the multiple Tobers in that shot!  Notice how she caught my blatant disregard for her photographic efforts!  See how my ear furnishings are nicely profiled at that angle!

In addition to being a Photographer, AAB Kathy is now an Officially Certifiable.

Apparently "Certifiable" has another meaning. Whoops!