I was on High Alert the other night! It seems a horrible slobbering monster was trying to get in my Library! AAB Christine and AB Karen were working downstairs when they noticed a monstrous presence at the door. Christine ran and got me (she's chicken) so I could give the would-be Intruder the Stink-eye: 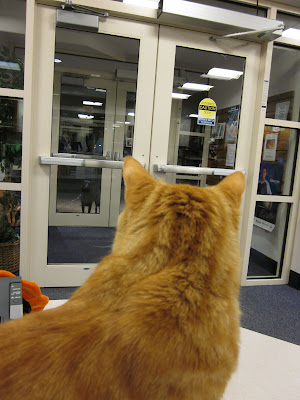 Do you see it? Isn't it a horrible thing? It scraped at the doors a bit trying to invade the place, but then it got a good look at me and made some whimpery baby-woofie noises because I'm One Intimidating Cat.

Here's a closer picture, just so you can see the Danger my Library was in: 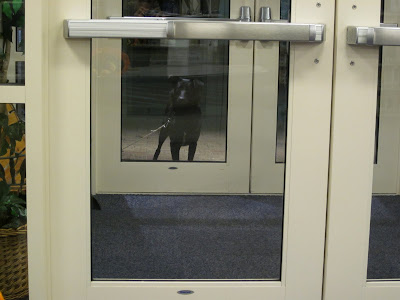 That thing could have gotten in and left drool-splotches on the carpets. It could have eaten all of the Cat Treats! It could have left black furs where all of my orange furs are supposed to be!

Okay, so AAB Christine says she was NOT scared (liar-liar-pants-on-fire) and that the monster was a woofie-dog named Peppy and he's a boy and he was just pausing outside for a minute while his person came in to get some library books. And he's really quite friendly and probably wanted to Play. ("Play" roughly translates to "eat Library Cat.") He's a Sheltie/lab mix--similar in ferociousness to the Godzilla/Mothra variety of monster.

AB Karen gave Peppy some of MY Cat Treats (see it could have eaten all the Cat Treats!) probably to distract him from his goal of Complete Library Domination. My Stink-eye and her ingenious use of Cat Treats meant that our evening ended peacefully and without incident.

Defending my Library from slobbering Beasties,

I am a Thankful Cat. 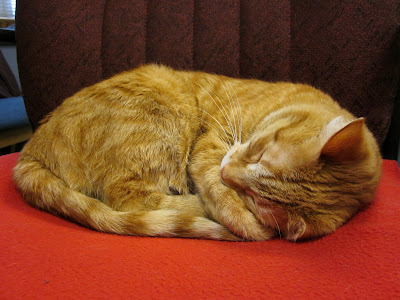 I hope everyone has a wonderful Thanksgiving with families and friends.

Email ThisBlogThis!Share to TwitterShare to FacebookShare to Pinterest
Labels: Thanksgiving

I have decided that it is not your Fault that my Assistant Bosses make me visit you every year. I don't know why they insist on doing this to me, since it goes the same way every time I visit. Maybe they do not pay attention when you tell them that I am bright (that's my smarts), alert, and responsive. Maybe they need to buy a scale to see that I am maintaining my slim and Mancatly figure so you don't have to use yours. Also I do not know what anomalies are but I'm pretty sure my teeths don't have any of those.

Maybe they just like to visit with you and your nice staff. I think that's A-OK, but I think they can just leave me at home with my pinecone and my fake leaves and my books and my sleeping blankie.

Anyway, I'm sorry I got all growly when you stabbed me in the rear with that needle. But I'm pretty sure you would get all growly with me if the situation were reversed.

Here is a picture of me in your window Saying No To Fleas: 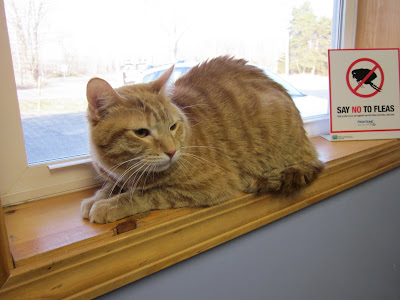 When I looked over my clean bill of health, I did notice that you gave me a Birthday of November 5, 2006. I have never had a Birthday before! I'm thinking my staff knew about this Birthday all along and just didn't celebrate it because they're too cheap to buy me presents. I'm thinking of Firing them, but I'll decide after Thanksgiving. (Some might bring in turkey for me.)

(But you didn't see that, 'cause I'm not allowed to eat people food.)

(Except maybe on Thanksgiving?)

Purrs & headbutts, mingled with some growls,

Dear Supporters of Stinky Goodness (and by extension, Me)--

I am happy to report that my Staff lasted a whole ten hours or so before succumbing to my pleas for nourishment. All it took was throwing myself at everyone's feet and extending my shrinking tummy for their inspection. AB Karen was the first to notice that I was wasting away before her eyes, and she (very sneakily) served me breakfast in her my office on Tuesday morning. Then she got busted when someone else noticed a bowl of smelly soft food on the floor, and now we are back to the way things should be. Forever.

My formerly Mean Staff have been reinstated as Nice Staff (especially Karen the Softie) and I have decided that I will not Fire anyone. Yet.

Today has been an exhausting day (it's a good thing they decided to feed me again!). I have had to patrol the Downstairs to make sure everybody showed up on time, I had to fling the Apple from Karen's desk several times, I had to provide a stool sample for the V-E-T, and I had to slay a Fly that invaded my Library.

I don't really understand why I was needed to kill the Fly, as it was a very slow-moving and kind of stupid one. AAB Christine could have easily caught and eaten it herself. But instead she came to get me. Maybe she was afraid?

So I am pooped. Here I am saying I can't take it anymore, World: 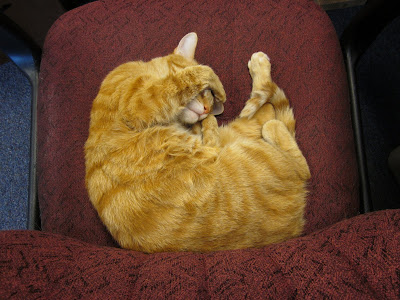 And yes, I'm supposed to go to see Dr. Jon (my mean V-E-T) tomorrow. Okay, maybe he's not mean, but he sure is rude with all the poking and prodding and sticking stuff in my ears! Anyway, I don't see why I have to do this again; I'm perfectly healthy and handsome and I use my box like a nice Mancat and I've got clean ears and feets and I'm strong and tough and have a soft coat. So Dr. Jon if you're reading this I want you to know that all you need to do tomorrow is pet me and I don't even need any of those dental treats because I have tartar control Whisker Lickin's. See you when you next visit the Library.

I have heard my staff muttering the most alarming things lately. I keep hearing words like "supper" and "dry food only" and "treats" and "he'll be okay" and, most importantly, "No More Soft Food."

This is getting out of hand. They think that they can deny me my daily doses of Stinky Goodness because I don't eat it at it too much. I just like the gravy. But still, I like the routine--knowing that they will drop whatever they're doing and run to the grocery store. . . how they apologize and give extra Catnip when AAB Breakfast-Giver Becki is out and they do the usual bang-up job of FORGETTING to FEED ME. . . how the smell of my squishy food invigorates my nose and whiskers after a good seven-hour nap!

What am I supposed to do with these people? I'd fire them all, but I suspect they'd come back because they wouldn't have anything better to do. Oooh, AAB Christine said that was a Rotten thing to say. Well, it's Rotten to starve a Poor Defenseless (no thumbs!) Little Orange Cat and change his routine without asking permission!

You know what else is Rotten?

My pepper from my gracious West Lafayette friends. AAB Britta discovered some fur growing on the underside of it (in the broken part) last week, so we took one last photo together. They even wrapped it in paper towel so AAB Ritchie wouldn't fish it out of the trash like he kept doing with Little Green Pepper. 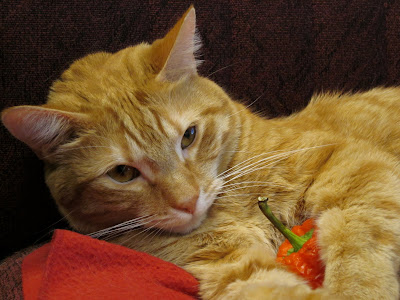 If I'd know they were going to take my suppers and breakfasts Away, I'd have saved Pepper for a snack.

Wasting away at the hands of my Treacherous Staff,

Something weird is happened to my New green pepper that was brought to my by my gracious West Lafayette Friends. We have been hanging out together over the last week or so, and I'm noticing changes. Here is a picture of me head-bumping Pepper to the floor last Wednesday. Please note the beautiful green color: 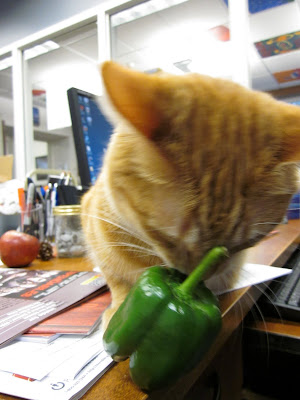 Now, Pepper is starting to get a little wrinkly in this picture, which is A-OK, because that's what little green Pepper (R.I.P.) started to do before he was thrown Away. But then on Monday I saw this: 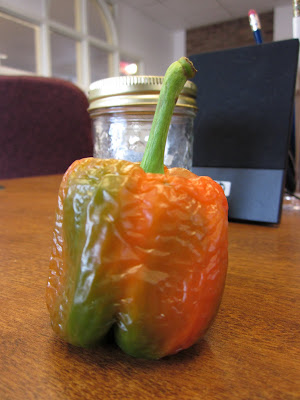 It's turning orange!!! What is happening? Is it defective? How did it turn from green to green & orange without my permission? Such a mystery.

Today I had AAB Photographer take a new picture of Pepper before he turns purple or something. He looks weird now, but he still smells nice, and the stem is still sturdy and grabbable: 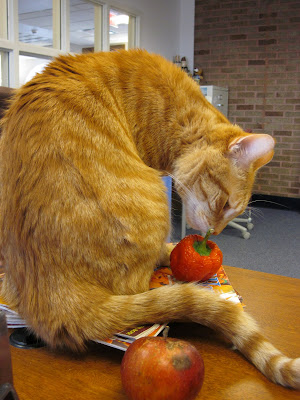 I hope that little green multicolored pepper and I have lots of time left together. My staff have noticed a gaping split in the bottom, but nothing is oozing out yet, so it's all good.

Email ThisBlogThis!Share to TwitterShare to FacebookShare to Pinterest
Labels: peppers

The last time I posted, I was pretty heartbroken about the loss of Little Pepper. While I was pepperless, I tried to make do with items that we have at hand. Here is the text of a Top-Secret Library Business Email (I'm sharing it because we are all such good friends):

This morning as I was putting away some Toddler books I noticed a small pine cone in the drawer of books that is on the floor. What? Did a child bring a pine cone in and lose it in the books? Oh well. Myrtle and I threw it away. I also noticed that Tober has decided he doesn’t like the leaves in one of the windows in the J room – he had knocked them completely to the floor! This afternoon I decided the leaves should be put back and in so doing noticed that there are also pine cones within the leaves. Aha! Tober has apparently been playing with the pine cone from the leaves and lost it in the Toddler books! If Tober would like his pine cone to play with it is now on my desk. Myrtle rescued it from the trash.

A pine cone is obviously no replacement for a small green pepper, but it did make a nice crunchy sound. . . Apparently my heartbrokenness upset some of my fans, because on Monday I had two visitors who came bringing a green pepper because they felt sad that mine was thrown Away. Karen Dalman and her friend Brenda came from the land of West Lafayette to meet me and to present me with a fresh small green pepper!!!!

Because of their niceness I allowed them several pets of my Mancatly self. They determined that I am a very Fine Manager and Boss, and they were able to see my 4' X 4' wood quilt (even though it has Tubby Tober on it).

They pronounced me a Very Fine Cat indeed (proving that they have Smarts), declared my quilt square and my Library Fine (more Smarts), and then visited the museum, which they also thought Fine (even more Smarts).

Here is an Action Shot of me with my New pepper, which I Love Love Love: 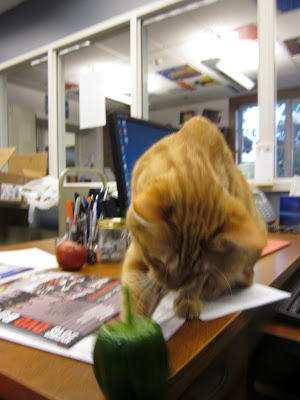 It makes a satisfying *thump* when it hits the floor (but it's not shriveled enough to fit in the paper tray thingie yet).

Then, because I am such a special Boss, I was presented with (!) a second small green pepper from AAB Becki!!!!!! AND AB Karen brought me a small winesap apple with a nice stem for flinging!

Now she (AB Karen) complains that staff desks are starting to look like Produce stands, but I ignore her because I am Boss and she is Not. I am One Happy Cat to have such thoughtful blog Readers!!!

Here I am posing for a Pepper Picture: 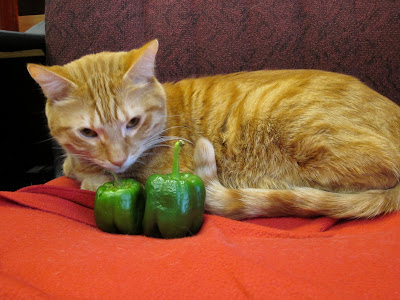 Now I have a desk-full of things to fling and slap! How great is that?