It's been hard to get any attention around here this week. I've had to resort to meOWing and paper-ripping and even putting the bitey on some folks to get treats and chin-scritches. (Don't worry, they were gentle biteys.)

How can you possibly ignore THIS? 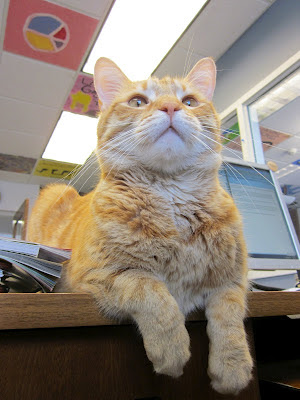 Yeah. I don't get it either. That's one handsome mancat, I say.

Happy, safe weekends to everybody!

Email ThisBlogThis!Share to TwitterShare to FacebookShare to Pinterest
Labels: handsomeness

I spy a bag of treats! They are surrounded by useless junk like Mentos gum and contact solution and Tums, but they're there! 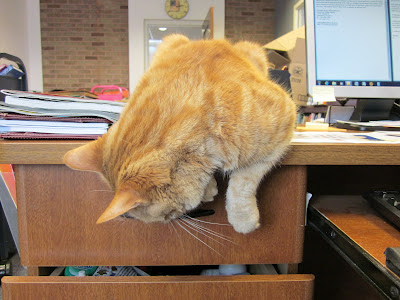 Get me some treats, lady! 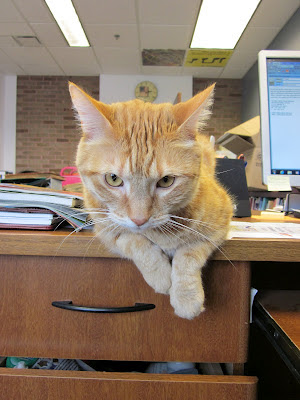 I don't understand why we have to do all of this camera-waving before I get some treats.

Email ThisBlogThis!Share to TwitterShare to FacebookShare to Pinterest
Labels: treats

I get bonus Adorable Points

Friends, I think we might have Hoodie-Hooed a little too hard on February 20. We did not intend to skip Spring and head straight into Summer, but that's what the weather is like here!

One good side-effect of Early Summer is all of the sunpatches lying around in the library. There is a particularly good one in the YA room every morning. 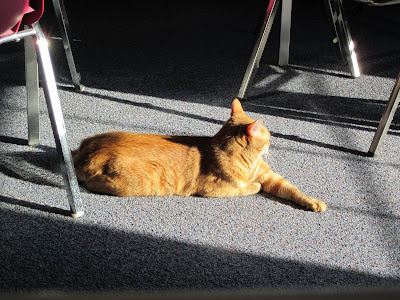 Once I'm warmed up by the sunshines, I really get a hankerin' for a good bellyrub. 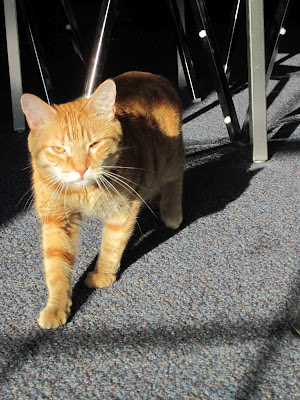 Present the belly in the most irresistible fashion possible: 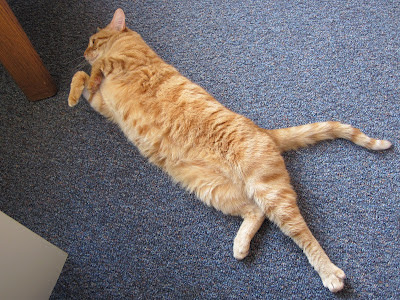 Notice how I maximize the rubbable area by (a) pulling my front feets up way high and (b) stretching my hind legs waaaaaaay out behind me. This makes my pettable surface area approximately 90% belly and chestal region.

Now, start rolling, dragging, stretching, purring, starfish pawing, and generally looking irresistible. How do you do this?

I know it looks like a whole lot of cuteness is being rewarded with not nearly enough belly-rubbing, but rest assured, I got LOTS of petting for that display of adorability.

Do any of you have any special belly-rub solicitation techniques?

I need to get my AAB Blog Helper on the ball so I can do more postings! So far I have met my New Years Resolution Goal of at least ONE (1) post per week--but just barely!

Okay, I have a special video for you on this Purrsday. I've been waiting for WEEKS to post it, but AAB Blog Helper keeps letting Purrsday pass us by. . .

You have to turn your Volume up really loud, and kind of ignore the chattering in the background. (Okay, it's not just chattering, it's AB Karen helping a gentleman with some research, or some other super-important yet Non-Tober library thingamajig.)

For anyone who might be concerned, I DID get several treats for my efforts there. Although only a few; AAB Blog Helper can be kind of stingy.

Email ThisBlogThis!Share to TwitterShare to FacebookShare to Pinterest
Labels: Purring

We had a Winter Reading Program going on. Now that Winter is officially over (thanks to Hoodie Hoo Day), it is time to announce the results. Our youth department competed with the adult department to see who could read the most chapters! It was a friendly competition (for the most part) and all readers did a good job! Here's my wrap-up from the March Newsletter:

It was an epic battle of words and wills, my friends. “Warm Up with a Good Book” (or what I like to call “The March of the Penguins”) has come to an end. It was a fierce competition, pitting Big Sibling against Little Sibling, Parent against Child, Library Staff Member against Library Staff Member. . .

One Staff Member, whose penguins were wanted by both adult and youth departments, threw his hands in the air and ran screaming from the building, the pressure too great for him to handle. (Okay, just kidding. He split his chapters read equally between departments.)

The youth department took an early lead, with swarms of penguins forming along the bottom of the circulation desk. The adult department posted a 6-foot thermometer on the wall, and AABs Christine and Britta colored until their arms were aching. Then the battle really began.

Staff members were cutting out little penguins around the clock. I was even staying up well past my evening naptime so that I could help. Readers of all ages Warmed Up with Good Books so much that winter was banished early—on the final day of the competition, the temperature reached a spring-like 66 degrees! (Hoodie Hoo Day also helped, I’m sure.)

Finally, on February 29, the penguins and chapters were counted. The youth department total was an astounding 1,506 chapters! WOW.

Now, think about this a minute. The program began on January 16. That means that The March of the Penguins lasted 45 days. Since the children read 1,506 chapters, that means that they were reading approximately 33 chapters a day! I’m impressed!

That means that TPL “Warm Up with a Good Book” readers read a total of 5,065 chapters between January 16 and February 29. Congratulations, everybody, for a job well done!

Well, now that I've written all those words, it time for a Caturday Snooze: 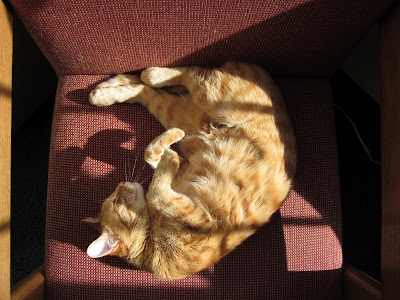 I hope everyone has nice relaxing weekends and that everyone was safe during the awful storms yesterday,