Once a year (and only once a year, if I'm lucky), my posse travels to the Thorntown Veterinary Clinic to make sure I'm healthy, trim, alert and responsive, and able to continue eating treats at an epic rate.  Dr. Jon gets to gaze into my remarkable eyes, look at my pearly-white teeth, pet my luxurious furs, and *ahem* look at my immaculately clean hindparts.

Then he stabs me in the butt with a ginormous needle and AAB Karen gives him money.

Here he is with his minions: 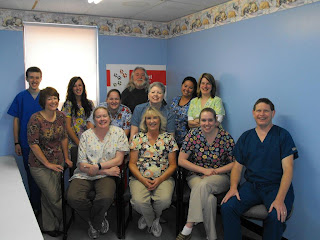 Well, "minions" might be a bit strong.  "Apprentice evildoers" maybe.  "Henchmen" (and "henchwomen").  Hmmm.  I'll work on the terminology.

Anyhoo, he's the one on the right. He's probably in the middle of an evil laugh.

My posse tells me that it really isn't that bad and that I couldn't possibly find a better, nicer group of people to do all of the rude things that Dr. Jon and his staff  do to me.

Then I show them this picture: 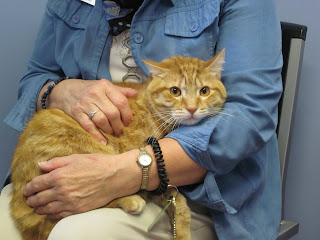 This is almost exactly like my Thunderboomer Face, only my pupils aren't quite as biggified.

Oh, geez, now AB Christine is accusing me of being melodramatic.

Congratulations on 25 years of poking, prodding, and stabbing poor helpless animals.  You are very good at what you do.  Thanks for being an awesome V-E-T and keeping me nice and healthy!

Purrs and headbutts (and a bite if you come near me with a thermometer),

So this was on page 8 in the May 15 issue of Library Journal: 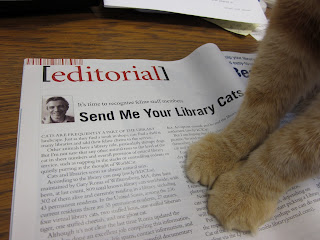 At first I was a little worried about the author's sanity.  I mean, why would any library lucky enough to have a cat send it away?  And what is Michael Kelley going to do with all of the cats that show up at his place?  After I read the article, I learned that they just want photos and stories--and boy oh boy, do I have lots of those!

Library Journal, for those of you who don't have a human who works in the library biz, is a magazine that shows up a couple of times a month.  As you can see in the picture, it makes a really nice place to sit.  It also has articles about libraries and books and library people and all of that stuff.  Edge-of-your seat reading, second only to Cat Fancy.  Lots of pictures, too!

Well, apparently the very wise Mr. Kelley has decided that LJ (that's snazzy-speak for Library Journal) needs to get with the program and feature some Library Cats.

I am composing my brief bio this week.

I hope LJ is ready to bask in the glow of my Awesomeness,

PS:  This Saturday, June 8, is our Summer Reading Kickoff Day!  Come by from 10:00am to noon and sign up for summer programs and enjoy snacks and activities!  At 10:30 am there will be a very special "Can You Dig It?" animal program presented by the fine folks from ANIMALIA.  Stop by and join in the fun!
Posted by Tober the Cat at 9:00 AM 11 comments:

Hi guys!  Long time, no see!  You can blame my absence from the Internet on AB Christine.  Big surprise.  First she claimed excessive busy-ness, then she took Unauthorized Vacation, then she called the Library and said she had something called The Floo.  Meanwhile, I've been languishing away in the book return (which has been moved so that no books are returned on top of me).

Before all of the busy-ness and Vacationing and Floo, we had several interruptions in my library life.  It was absolutely horriblefying!

First, THIS showed up in the mail: 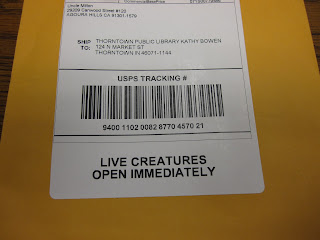 What could possibly be in that package?  Huh.  Let's open it. 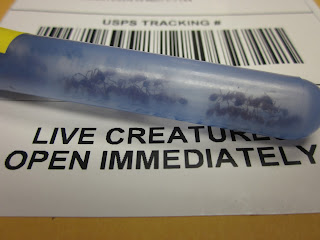 Oh look--snacks!  The kind you can hunt down, then eat!  I gave them a few sniffs to see if they were high-quality ants or some generic off-brand. 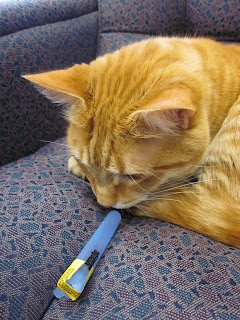 Guess what?  They would have been really tasty. . . but these were "special" ants.  AAB Kathy ordered them to live in the library's Ant Farm this summer.  They're on display in the youth department if anyone's interested.  FYI all of the ants are girl ants, and all of them survived AB Christine's refrigeration (which included setting a timer, then leaving said timer in ANOTHER ROOM, then going "OH NO" and thawing the ants a few minutes too late, then realizing she wasn't ready for them yet, then re-refrigerating them while she inhaled more ant-sand, and finally dumping them into their new home).  These ladies must have some sort of ant superpowers to survive her "care."

Personally I don't know why we had to order them.  All we really have to do is drop a cracker on the tile and leave it overnight; then we would have an antstravaganza the next morning.

Here they are in their new home: 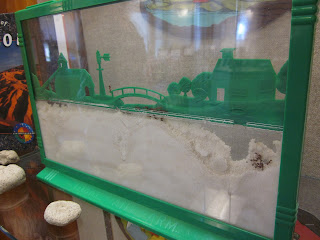 I was relieved that these "Live Creatures" were not soft, fluffy, and lovable.  I demand ALL of the attention around here, and I don't want some silly Ant Farm decreasing my daily allotment of pettings, treats, and tummy rubs.

Then something UNTHINKABLE happened.

Do you remember Not-Tober?  He was that funny-smelling, MY litterbox-using Imposter that my treacherous library staff made a big fuss over a couple years ago.  I was pretty mad about that incident, and rightfully so.  I fired almost all of my staff (except Kathy) because they all fell under his spell.

I re-hired them soon after because it's easier to scam treats out of multiple people each day.

Anyhow, I thought they learned their lessons.  Well.


I would post more pictures of the rotten little thing, but I already know all of the human readers are "aawwwing" and "squeeing" and probably fainting with happiness over seeing such a tiny smelly kitten on my blog.  Okay, okay. . . AB Traitor Christine even took a MOVIE of the dumb kitten:


Notice how the silly little thing has NO sense of "personal space" and very little in the way of coordination.  NOT cat-like at all.  Very likely defective.

Thankfully someone stuffed it (i.e. placed it gently) in a (well-ventilated) cardboard box and took it (to a good) home at the end of the day.