I am not a dog.  I am a cat.  Yet, for some reason Barb L. has it in her head that I can learn tricks like how a dog learns tricks.  Now to be clear, I can learn tricks, it's just that I won't.  Ever since she went onto the inter web and watched videos of cats doing tricks she's been dreaming of the day I'll do tricks for treats as well.  She's been trying to get me to "high five".  She gets a treat out and holds her hand out and waits for me to put my paw on hers.  And when I don't, she picks up my paw and puts it there herself, and then finally gives me the treat.  And I do not like my paws touched.  Nope.  Barb tried this several times in a row one morning, but I was not having it.  She may have told a few people that it would take me at least two years to learn to give her a high five.  But Barb is persistent, and really wants me to do this trick, so she may have tried to bribe me by promising me eight whole treats on the day I do the trick myself.  I told myself I wouldn't give in.  But here's the thing.  I really love treats.  Ever since I've been limited to just a few treats a day, my love for treats has only grown.  So while I may not want to do the trick, I really want a treat (or two or three).  And eight is a lot of treats to pass up, so one of these days I might surprise Barb by giving her a high five.  I'm putting the line down at "shake" and "roll over" though.  There are just some things I'll never do.  Unless there are more treats involved.  Until then, I will resort to my favorite way to get treats.  Stare at the treat drawer and look hungry, sad, and cute until someone gives in. 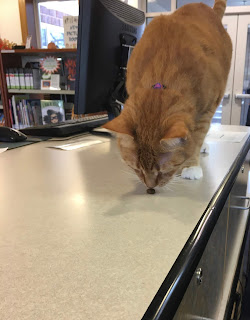 Waiting for a treat,
Chance
Posted by Chance Cat at 3:50 PM 5 comments: