This morning I went Downstairs by the meeting rooms to say Hi and na-na-na-na boo-boo to my Enemy Oreo. Oreo is an Outside Cat who comes to my glass doors and windows and we have Slap-fights. (My Assistant Bosses say it is good that we only have Slap-fights and not real fights, because I don't have any toenails. I think they secretly like this Oreo.)

While I was saying Hi and na-na-na-na boo-boo to Oreo, a Man who is being trained as a People Counter Census Taker saw me and decided that I wanted to Go Outside. So he opened the door and put me Outside.

I came back Inside.

And guess what? This very determined Man put me Outside again!

Then he closed the door and left me on the Outside of my Library.

This is the horrible door where it all took place: 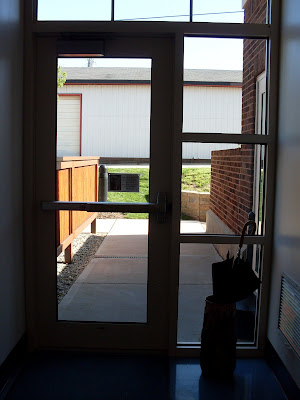 I do not go Outside unless I am being hugged by Assistant Cat-Carrier Christine for a trip to the V-E-T. I do not like it. There are things missing from the Outside, like comfy chairs, cans of Whisker Lickin's, belly rubs, and My Staff.

Two of them passed right by me to get into the Library! 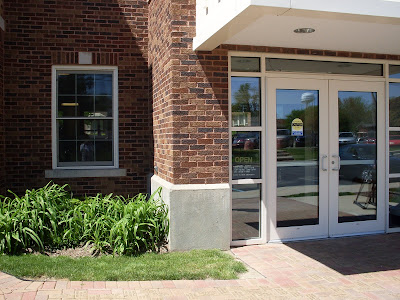 I was in these bushes because they were Safe and near my Library.

I was way back in here: 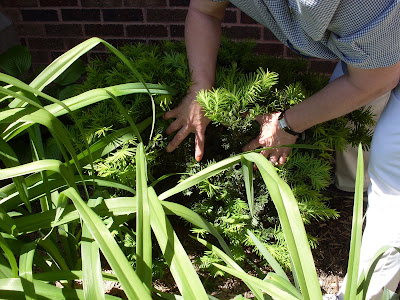 They tell me that they searched the whole building for me and could not find me (yeah right) and Assistant Assistant Boss Becki finally interrupted the Census Taker Training Time and said "Hey have you people seen our Boss Tober?" and they said "Yes, we let him go Outside."

Which is not quite true because they MADE me leave. I am very small and could not make them understand that I live Inside.

Anyway, Assistant Assistant Boss Becki made them stop what they were doing and come help look for me (which is okay because they needed a break and some Fresh Air). So they walked around the building looking for me.

AAB Becki found me in the bushes and WOW she put a squeeze on me like I've never been squeezed. I was getting a little squashed but I didn't mind One Bit because she brought me Inside where I got treats and tummy tubs and hugs and more treats and everyone was very Happy and Relieved to see me again.

Which is good because if they hadn't brought me Inside I would have fired Every Last One of Them.

Now we (meaning Not Me) are in the process of hanging signs on all of the Library doors: 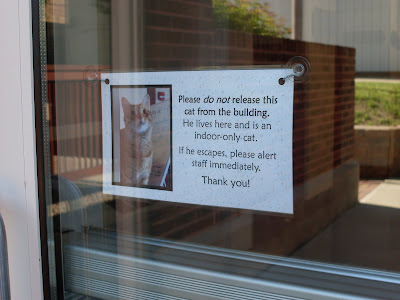 I have decided that the Outside is fun to look at, but it is for the birds and squirrels and flowers and stuff. I will continue to Slap-fight at Oreo, but she can keep her Outside. In here I have air conditioning and all the People I need. 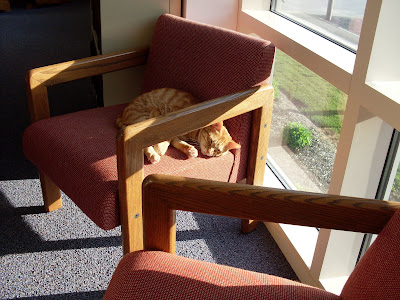 You know none of this would have happened if everybody had just filled out their Census Forms,

Here is one of my many many exercise routines that I use to stay sleek and healthy and Handsome.

First, I hop under a desk that has a trashcan.

Second, I knock over the trashcan.

Third, I pull out any Posty-Notes that may be inside the trashcan. 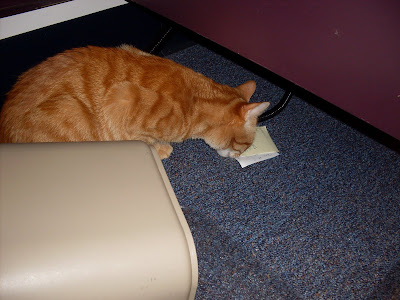 Fourth, I chew on the Posty-Notes because the are the best for chewing (after cords, that is).

Fifth, I nap and look adorable. 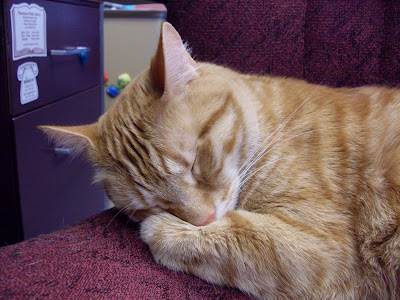 For an even greater challenge, I like to stake out desks and steal the paper clips and Posty-Notes and other interesting things from desk drawers when they are opened! You may want to start with the trashcans, because staking out a desk can be quite Strenuous.

Most of my other routines involve a good deal of stretching.

Fit as a kitten,

Helen at the Well is a Big Hit with local Residents!

Firstly, let me say that this Inventory thing is still going on, and the beeping makes me very annoyed. However, the staff seems to be losing steam, and their beeps per day are down considerably from the first week. Still, treats are really hard to come by, and I sometimes have to resort to making a ruckus: 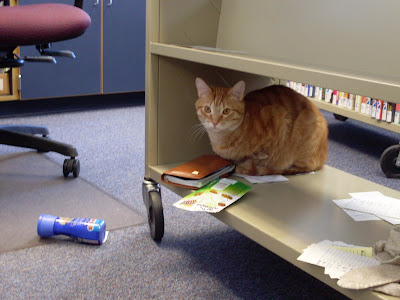 I first made a ruckus and then sat and stared by AB Karen's VIP (Very Important Planner) so that I would be guaranteed a treat and an apology. (This technique worked.)

This next one was a little trickier. AAB Christine kept moving my treat can around and I tried to s-t-r-e-t-c-h to get my point across: 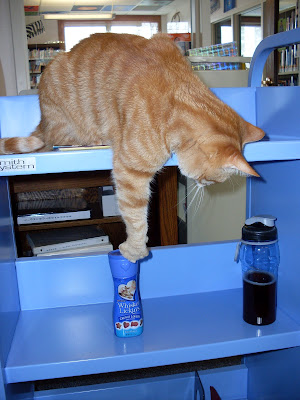 (This technique did not work because AAB Christine can be One Big Meanie. She insists I need "exercise.") 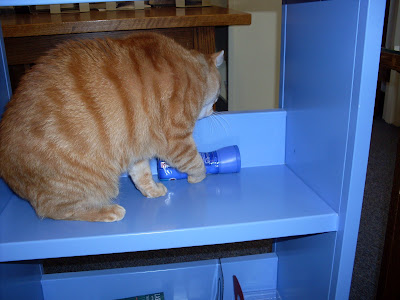 . . . and eventually got my way. (It did take a bit of thumping about and finally flinging the treat can from the cart. . .)

Secondly (and lastly): Libraries are great resources for the community, right? We have books and DVDs and CDs and magazines and newspapers and things. We also have computers and the Internets and meeting room spaces. We have programs for small people and medium-sized people and grown-ups. We have friendly and helpful workers who will help people find out what they need or want to know. But Thorntown Public Library goes Above and Beyond the Call of Duty by offering one more resource for the Animal Community: 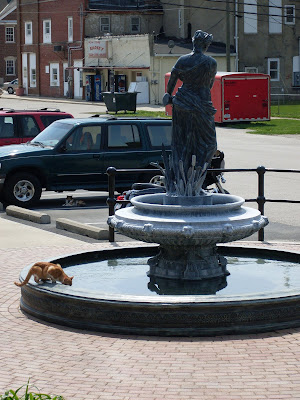 A gigantic water dish! (Our water dish is so classy, it has a name--"Helen at the Well.")

Snoopervisor and Protector of the Helen at the Well,

PS again - My staff reports that they are almost done with beeping Inventory and I am very proud of them for all of their hard work and the books and DVDs and things will be much nicer and easier to find because of their dedicated beeping. Thank you!
Posted by Tober the Cat at 12:05 PM 14 comments:

Email ThisBlogThis!Share to TwitterShare to FacebookShare to Pinterest
Labels: Helen at the Well, Inventory, treats

It is Springtime here in Indiana. Because I am an inside Library Cat, I don't get to go Outside with the birdies and the flowers and the squirrels and the other things.

So someone brought some Springtime inside for me. 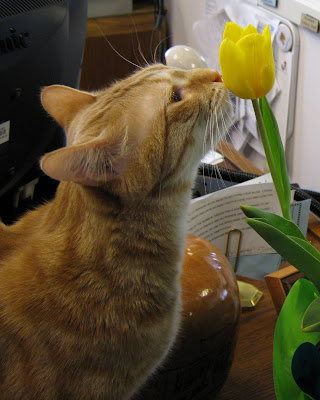 Flowers are not very mancatly, so I will probably eat them later.