If you fear the eight-legged snacks *spiders*, you may not wish to read the rest of this post.  The other day I came face to face with one of the most enormous spiders to make it into the library and survive without having the unfortunate demise of being squished. 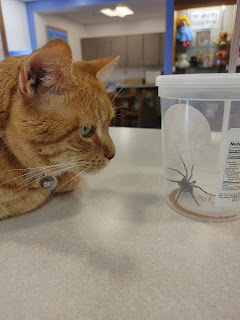 The eight-legged snack spider had been carefully caught in Sandy's barn, saved in a plastic container, and left in Barb L.'s office for her to find.  (If the spiders are that big in Sandy's barn, I'd hate to see what the other insects look like)  Barb had a much better reaction to it than Newbie Lillian did (Newbie Lillian says I have to stop calling her that because she isn't the Newbie anymore, but I'm the boss.  I get to decide when someone isn't a "newbie" anymore.).
Newbie Lillian took one look at it, shuddered, and practically ran away hyperventilating.  She was very easy to scare for the rest of the day.  Especially after Barb brought it out to the Youth Desk for everyone to admire and Newbie Lillian had to work in near proximity to it. 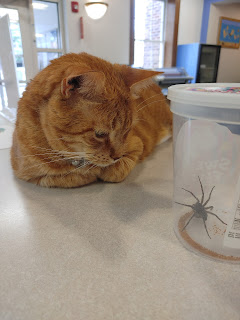 When I eventually found the large creature, it was trying to escape.  Naturally, the humans wouldn't let her escape.  But I think it would have been a lot more fun if she had been outside the container. 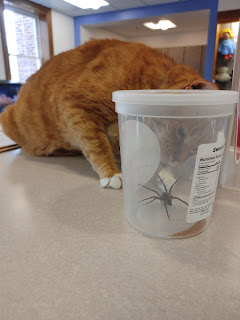 To show how eager I was to be friends, I tried to play with her from outside the container.  I don't think she liked me very much though.  Maybe she thought I would make her into a snack. 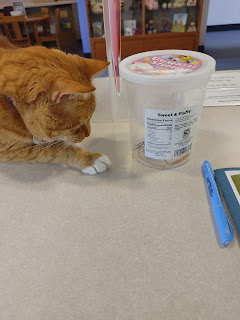 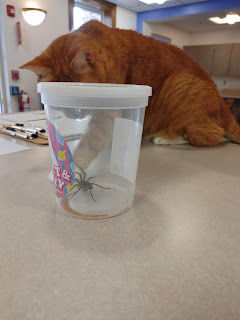 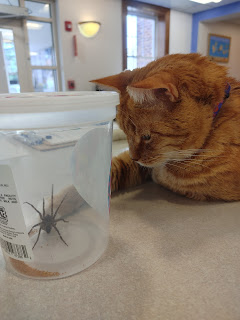 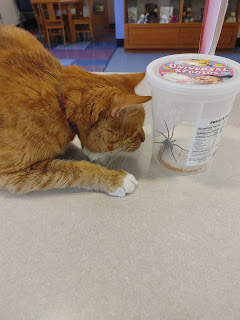 I have no idea why she would think that.
I'm off to look for more snacks friends,
Chance
Posted by Chance Cat at 9:13 AM

That is one big spider!!! Wish they would let her out so you could play with her.

Barb is a turkey! I'm sure the "boss boss" wasn't a big fan of the spider, either!

That's indeed a large spider, Chance. I hope he was let go eventually.

Hoomons are no fun when it comes to squishy things found outside. I enjoy finding tiny black frogs in my Catio where the two huge water bowls are. Every morning I find one or two frogs and I try to bring them indoors to play with. But when Momma sees me with my toy, she takes it away and sets it free. I've never played with a spider that big, but I bet if I brought it into the house my Momma would shriek before she scooped it into a container and set it free outside.

You are SO brave to get that close!