Saturday was a fantabulous day at the Library! I began with a nice roll on the floor, which earned me tummy rubbings and exclamations of admiration about my fuzzy yet mancatly belly. 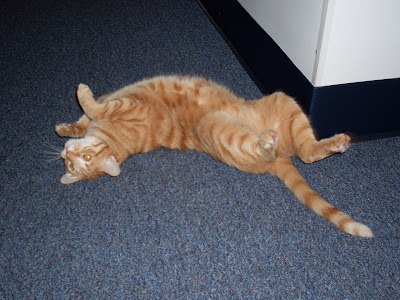 Before we opened I decided to help a little bit with the shelving: 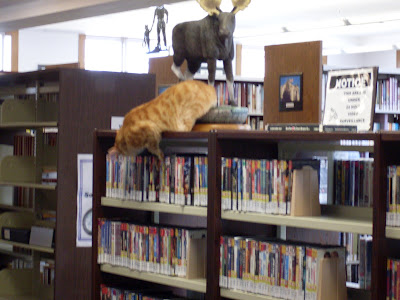 Then, right at closing time, I found an Intruder in the Library. My Assistant Assistant Bosses came to witness the Battle. I found a bug in the window of my Library, and I will not stand for that. Bugs do not belong in Libraries! So I jumped into the window to attack: 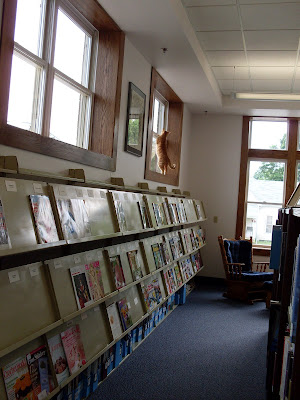 Christine and Chris were Very Impressed that I got into the window all by myself. I don't know why they were Impressed. I am a cat, and that is what cats do.

Anyway, I got the evil intruding bug in the corner of the window, and I was really giving him a rough time: 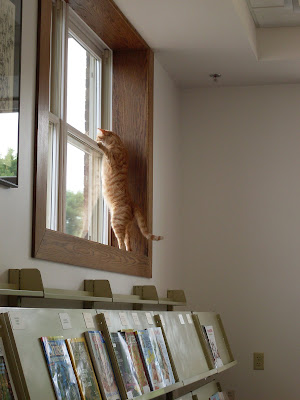 I was winning the fight, and had gotten him between my paws and teeth a few times when AABs Chris and Christine started getting really excited. 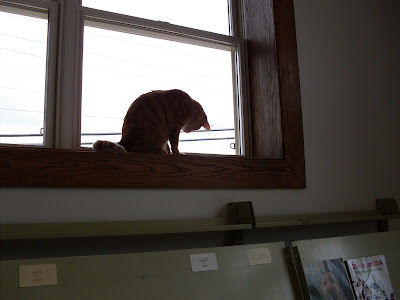 They started yelling about "wasps" and "stingers" and started moving furniture around. Then Chris did a really Bad Thing. She climbed up on a chair, took off her shoe, and smashed my opponent.

I was WINNING, and she took my fun away!

Apparently some ladies are afraid of things with stingers. AAB Christine confessed that she normally RUNS AWAY when she sees a stinger-bug. I will have to coach her on bug-hunting in the near future, because I obviously cannot be awake every time a stinger-bug invades my Library.

Chris, on the other hand, is Very Brave. . . even though she could have left the killing of the bug in my capable paws.

After AAB Christine smooshed her hands all over my face and nose and feet (she thought I might have been wounded in action) I received treats and tummy-rubs.

Tober, Defender of Library Windows & Staff
Posted by Tober the Cat at 10:24 AM

What an exhausting day Tober. You did good with that bug.

Good job or protecting yoor staff. Our mom smashes bugs wif stingers too, she seems to worry about us getting stung. Something about big bumps and fevers and stuff.

You were just doing your job ...

Oh my gosh! I don't want my face to blow up! Then I wouldn't be so darn handsome!

Youz has to understand dat those bugz can be lethal to kittiez an' ta doggies. It is only because you are l♥ved to dearly an' deeply dat da ladies smooshed dat bug.

Our momma lets us play wif flies an' such but not wif da stingin' kinda bugs. While you were savin' da ladiez, da ladiez was savin' youz.☺

Tober you are quite the defender, but I am glad that Chris smooshed the bug first - I don't want you to get hurt by the stinger! And yes, some of us ladies are afraid of bugs with stingers - I completely understand being nervous!

Tober, I once got stung by one of those bugs...it swelled a little bit...and hurt a little...maybe it was best that Chris smacked it! But at least you had some fun with it first!

Tober, you are a very brave mancat! Stingers sound a little scary!!

Hahaha. Good thing that you didn't catch the bee, you could have ended up like Waffles, here: http://cuteoverload.com/2009/05/31/waffles-grabbed-a-bee/

My mum tells me that my sister Pandora got stung once by a bee. Her paw swelled up to double its size! thankfully she was otherwise fine. My sister Zowie likes to hunt bugs. My mum wishes I would hunt spiders because she says there seem to be a lot of spiders around these days.

Good job on protecting your staff! :)