The library meeting rooms have been visited by an Anonymous Artist. This person has captured very perfectly my expression when about 30 children come to pet me at the same time: 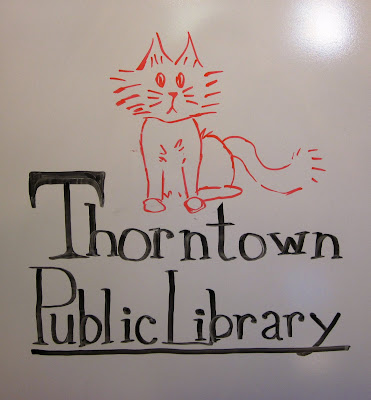 Isn't that great? No one seems to know who made this wonderful Picture of me, but AAB Becki has been commanded NOT to erase it from the wipey-board. (She usually listens pretty well.)

But just in case someone comes in who DOESN'T listen, it is now preserved forever and ever on the Internets.

AAB Christine, in her (vain) attempts to be officially re-Hired, has been bribing me with fresh Catnip. 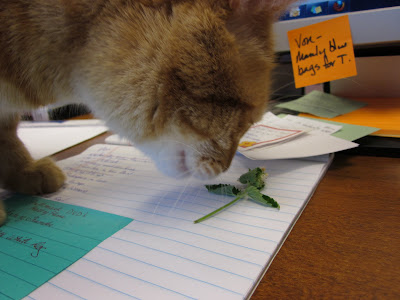 Do you see the orange posty-note in the background? That is my reminder to thank Von for bringing in nice blue "deposit" bags for me (mostly because my Blog-helper is forgetful and doesn't help me post enough). Blue is a manly color, so they are double-appreciated. Thank you, Von!

Junior and Orion let me know that I was featured on mousebreath! earlier this week. I had never heard of mousebreath! before, but now I know that it's a really neat online magazine by cats and for cats (and cat lovers). Skeezix submitted a nice post about my Bossliness, and as a result of his writing, I am now officially Emperor of the Library!

According to Wikipedia (which may-or-may-not-be-true), "the emperor of Japan is the only reigning monarch with the title." Well! I'm just going to have to fix that silly Wikipedia article, I think.

I hope everyone has a happy weekend!

Emperor Tober
Posted by Tober the Cat at 9:46 AM

We prolly would be bribed with fresh nip, Tober, we're pretty shameless and easy.

Hi Tober. Love the expression on your face that the unknown artist captured so well! We kitties show a similar look of shock when noisy children come our way!

That is a wonderful rendering of you!!!!!

We are glad you get some fresh nip! We bet it's wonderful!!!

Emperor Tober, we love that drawing of you! The expression is priceless! Have a great weekend!

Emberor Tober, we love the drawing too!!! We are glad to see you will some nip to chew on!! Have a wonderful weekend! Lots of love, Debbie & Holly

Hail to the new Emperor!

I keep trying to think if there's any title that's even better than emperor... but I can't think of one! So I guess it will have to do for you, Tober!

What a cool picture of you, Emperor Tober! Patrons and staff should be leaving tribute to you before this beautiful artistic representation of you.

Oh, that is a nice drawing of you! I can see how you would look that way when 30 kids come all at once to pet you! That could be a little scary.

30 children at once?? You need to be ordained as a cat saint.

Thats a great picture of you Tober. I hope you find out who drew it and then maybe they can do some more for you. I also hope they will be getting you a suitable throne to sit on to go with your new title :)xx

I just knew you were royal. It's the orange suit. The cattitude. It was meant to be.