Celery makes me weird.  Well, that's what everyone says about me after I eat it.  And before you come calling or knocking or whatever it is people do, the Library Staff double-checked whether it was a good snack for cats on the very reliable internet.  Don't worry, it is perfectly acceptable as a treat.

Christine, the very important Boss Lady, brought some celery in her lunch the other day.  As other staff members could tell you, I can smell lunch from a mile away.  So of course I followed her to see what she was having and if she would share.  As it turns out, she was having celery.  Now typically, I avoid vegetables.   But when I see something green and plant-like, I can't help but investigate.  So I started biting the plastic bag it was in, hoping Boss Lady would take the hint. 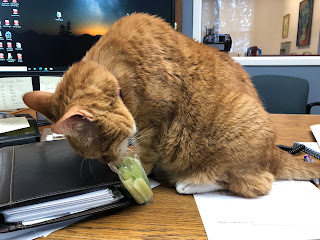 This is when she checked the internet on the safety of celery and cats and decided it would be alright if I nibbled on a piece. 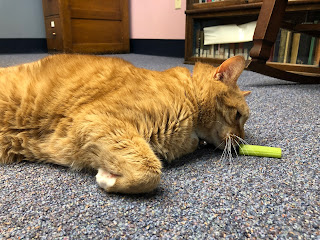 So I chewed on it and rubbed it.  The staff say I acted like a different, younger cat after interacting with the celery.  (Which is rude because I'm not that old)  There are apparently pictures to prove it.  According to the internet, celery has the same effect as catnip on some cats.
Suddenly I was ready to play, which is definitely something I do every day when I'm not napping. 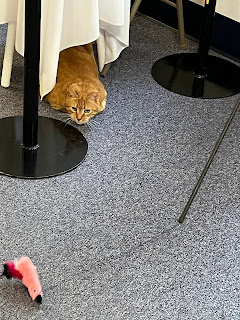 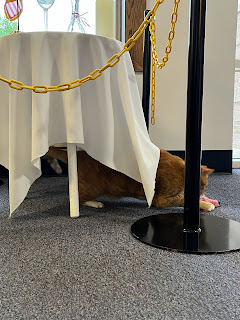 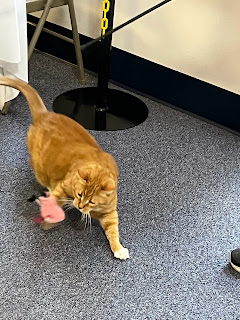 It was all fun and games until this picture happened: 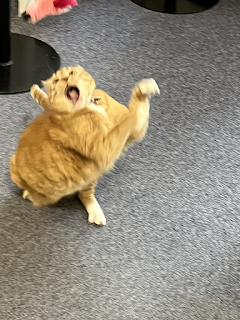 Like I said, celery makes me weird.
Well, I'm off to find another fun vegetable,
Chance

Celery did that for my late princess, Cammie, though onions did it even more. She didn't want to play, she just started twisting and rolling on the floor. I called it 'onion loopy'. I love that last picture of you, Chance - an action shot!